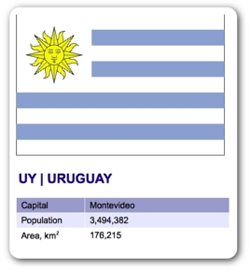 Uruguay is a country located in the Southern Cone of South America. It borders with Brazil on the north and northeast; to the southeast, with the Atlantic Ocean; to the south, with the estuary of the plate River and to the west with Argentina. It gets its name because of its location in the territory east of the Uruguay River. This country has a solid-based ad established bank system. Very strict bank secret laws are in use, so banks cannot reveal information to anyone, including the government of Uruguay or of any other country. There are more than 20 banks registered in Uruguay, some private and some of the state. The private banks correspond completely or partially to United States’ or European financial institutions. This allows them to maintain stability in the banking climate of the country. In addition, the banks are controlled by the Central Bank of Uruguay, which has a strict policy about authorizing new banks, Opening a bank account in Uruguay isn’t complicated, because you only need a form of identification, documentary proof of residence and a local reference. Non-resident foreigners can open accounts in United States Dollars,