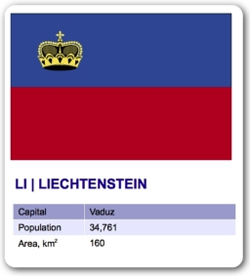 Liechtenstein is a constitutional monarchy whose population is only slightly higher than 36,000 and is located between Switzerland and Austria. It shares a border and monetary union with Switzerland. The official language is German, although they also speak English and French. The currency is the Swiss Franc. A referendum, held in March in 2003, conceded new powers to the governing prince, including the right to veto parliamentary resolutions, as well as the possibility of introducing emergency laws. Liechtenstein’s economy is based on industry and financial services. Domestic taxes there are moderate; however, there are several flexible types of holding and direct companies, as well as foundations that were tax-exempt until the end of 2010. Starting on January 1, 2011 all companies that hadn’t paid taxes began paying a minimum annual tax, fixed at 1200 Swiss Francs. More than 30 thousand offshore companies exist in Liechtenstein which pay around 30% of their income to the state. A trust fund regimen also exists, based on common law, although Liechtenstein is a jurisdiction under civil law. In June 2000, Liechtenstein was identified by the FATF as a harmful and uncooperative tax haven. The FATF placed the country on the black list. Each one of these harmful tax havens were given a year to correct their tax regulations.

Liechtenstein strengthened its anti-money laundering regulations; because of this, it was eliminated from the black list in 2001. Then, in 2009, Liechtenstein was deemed an embarrassing territory because it hadn t substantially implemented the standard international agreements regarding fiscal transparency. In the following months agreed to sign 20 agreements for the exchange of fiscal information, with countries like France, Germany, United Kingdom and the United States. In May of 2010, the governor of Liechtenstein approved the creation of a new Tax Law that modernized the previous law dating back to 1961. Historically, taxes on business earnings taxes in individual income was set at 18%, for those with higher income. There and is also a 2% net tax for companies and 1% for individuals.