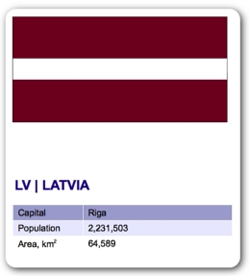 Latvia is one of the three Baltic States. Its population is slightly over 2.2 million. The government is presidential and the Head of State is elected for a period of four years, by the Latvian parliament. As with all the other countries that were part of the Soviet Union, Latvia has privatized a large part of its economy. The country’s advantageous position has allowed it to become an important stopping point between the commercial flows of the United States, the European Union, the Far East and Russia. Latvia joined the Worldwide Trade Organization in 1999 and the European Union in 2004. The country has three main ports: Riga, Liepaja and Ventspils, as well as an extensive railway that connects it to Russia, the other close-by Baltic States, and Poland. Earnings from dividends paid by Latvia and the United States are tax-exempt. Businesses that operate in the special economy Zones in Liepaja, Rezekne and Riga, as well as the Free Port at Ventspils, receive tax reductions that go between 80% and 100%.