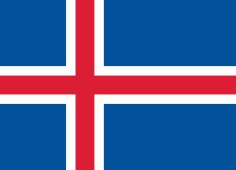 Iceland is a Nordic island country of Europe located in the North Atlantic Ocean. It has a population of 332,529 and an area of 103,000 km2, making it the most sparsely populated country in Europe. The capital and largest city is Reykjavík.Iceland has a market economy with relatively low taxes, compared to other OECD countries. It maintains a Nordic social welfare system that provides universal health care and tertiary education for its citizens. Iceland ranks high in economic, political, and social stability and equality. In 2016, it was ranked as the 9th most developed country in the world by the United Nations Human Development Index, and ranks first on the Global Peace Index.

Iceland runs almost completely on renewable energy. Affected by the ongoing worldwide financial crisis, the nations entire banking system systemically failed in October 2008, leading to a severe depression, substantial political unrest, the Icesave dispute, and the institution of capital controls. Some bankers were jailed. Since then, the economy has made a significant recovery, in large part due to a surge in tourism.

The largest banks in Iceland are Landsbanki, Íslandsbanki (previously Glitnir) and Arion Banki (previously Kaupþing).They were all nationalized during the banking collapse in October 2008 but have since to the largest extent been sold or taken over by creditors.The only bank in which the Icelandic state still holds the majority of shares is Landsbanki, 81 percent. The state holds five percent of shares in Íslandsbanki and a 13 percent share in Arion Bank.Other Icelandic banks include the fairly new MP Bank and the string of regional savings banks originally called Sparisjóður.Other Sparisjóður savings banks are performing well, most notably Sparisjóður Höfðhverfinga from the village of Grenivík in Northeast Iceland, which has opened a branch in the region’s largest town Akureyri.