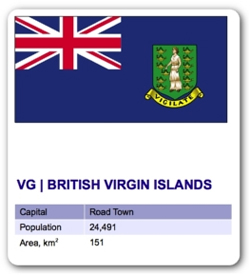 The British Virgin Islands (BVI) is a territory dependent on the United Kingdom, located very close to Puerto Rico, in the Caribbean. BVI is very well established politically speaking and, according to its constitution, the Governor represents the Crown and is the Head of the Executive Council. There are no more than 32 thousand inhabitants and is comprised of a combination of Europeans and Caribs. Its currency is the United States Dollar and there are no exchange controls.

Until 2005 the only significant tax in the BVI was on income and applied only to the few local companies and residents, although there were a few property taxes; however, after that date the Governor replaced the income tax with the “payroll” tax, divided between the companies and their employees. The BVI’s income is based mainly on tourism, although financial services are very important.

With the implementation of the 2004 Law for Business Companies, the distinction between onshore and offshore companies in the BVI was eliminated and at the present time it appears that there are more than 600 thousand companies registered in this jurisdiction, mainly from clients coming from Latin America and Hong Kong. There is no widespread banking activity in the BVI; however, it counts on a good reputation, thanks to the efforts carried out to avoid money laundering. The BVI jurisdiction is fairly inexpensive, compared to its rivals in the Caribbean region, and the professional services offered there are good. The territory counts on an international airport; its connections are mainly with Puerto Rico.

Financial Services Commission of the BVI